Jordan is an unusual Muslim country, in that its culture is based not only in Arabic and Islamic elements, but it has significant Western influence as well. Its location at the intersection of Europe, Asia, and Africa gives it geographic and population diversity. In some ways it is urbane and cosmopolitan, especially in the population centers. In others, it is stuck in the 1950s (no Walmart or any big box stores, for that matter). And in other ways, it is almost stone-age—think about its having no postal system. Crazy! Thank goodness someone invented email.

We might think the family is of paramount importance in America, but our divorces rates say otherwise, hovering around fifty percent. Jordan has the lowest divorce rate among Arab countries. In 2018, it was 5½ percent.[1]

Our culture is based on individualism. The basic social unit in modern Jordan is the family, not the individual. State, religion, and Arab culture rely upon the family to maintain order over the individual in a wide variety of ways.[2]

The importance of the family cannot be overstated. Daily visits are not uncommon when family members live near each other. If they are apart, cellphones and Skype become valued devices. It is not unusual to talk on the phone with each other for hours every day.

The extended family is typical, and it is normal for them to live in multi-level homes. We didn’t have time to visit any other cities during our stay in Jordan last year, but our time in Aqaba revealed the housing is usually three-level (sometimes four-level) villas where different generations live on separate floors.

Even when they don’t live in the same building, family members who are within easy distance, often gather on a weekly basis. One person I read about said around 75 members of his family meet each week in his grandparents’ home. Family heads often ensure their adult children live nearby in the same apartment block of the neighborhood to make it easier to gather. It is unthinkable that an unmarried young man—much less a young woman—live away from his parents’ home. After marriage, a son often brings his bride to live with his family.

Extended family members come in very handy to support a marriage and help start a new home. Likewise, respect for the elderly is also a big part of the culture. It is expected to take care of one’s parents when they grow old. No government and Social Security involvement. The family takes care of its own. That’s how it was done in Bible times; hence the distress when a woman did not bear children.

Three aspects that are very important in Jordanian family life:

The patriarch, along with the family or clan, makes decisions for individuals’ lives in many areas such as career choice, marriage, and resolution of business or social conflicts. A priest will not marry a couple if the family does not approve. If someone feels they were wronged, insulted, or harmed by another, they appeal to the patriarch of that person’s clan. Whatever he rules is binding. Civil courts will not intervene.[5]

Weddings hold a place of great importance in Jordanian family life. I am going to scratch the surface because I could fill two blogs with details about this most over-the-top of traditions—unlike anything you will find in Western nuptials. Maybe I will do that at a later date.

A wedding has three parts:

There is the pre-engagement where the man’s mother meets with the prospective bride. The mother of the groom will then formally make a proposal to the bride-to-be on behalf of her son—although the son will generally have spoken to her prior to this. If the bride accepts, then the immediate families on both sides will meet and will read Fatiha (the opening chapter of the Qur’an) together as a recognition of the engagement.[6]

Next is the engagement party, which the bride’s family pays for. If the marriage is arranged, the day after the party, the couple begins to get acquainted.[7] At the engagement party, they sign the papers and are legally married at that point. However, they do not live together until after the wedding party. If for some reason they decided not to go through with it, they must formally divorce.

A traditional Bedouin wedding celebration lasts five to seven days. Isn’t this sounding more and more biblical? The week begins with meetings in the tents of the bride and groom. As each day progresses, so do the number of guests and the bounty of food.

Women gather with the bride in her tent to do what women do. On the night before the wedding, they paint her hands and feet with henna. Once considered an essential part of preparation, it is slowly dying out. It used to show a bride’s sorrow at leaving her family home, but now it is mainly tradition with the Western wedding shower taking its place.[8]

The groom’s tent is where all the action takes place. The men are quite a bit rowdier than the women—singing, dancing, shooting pistols and rifles into the air. Letting off a little testosteronic steam, I guess.

We looked at apartments in Aqaba to get an idea of where we might like to live. Across the street from one building we looked at was a popular vacant lot where folks gathered in the early hours of the morning to shoot guns post-wedding. We decided not to consider that location.

On the big day, the groom’s male relatives get him ready; the women prepare the bride. A typical wedding gown is an embroidered dress, gold or silver jewelry, and a green silk cloth covering her head. White is not considered an appropriate color. Having said that---

The female relatives then lead her in procession to the groom’s tent where the wedding is held.

Seven days later, the groom’s female relatives wash and dress the bride. She is now officially married and a part of the groom’s household.[9]

Taking a cue from the Bedouins, a non-Bedouin Jordanian or Christian wedding follows much the same path.

A noisy caravan of honking cars accompanies the bride. On arrival, the men sit outside the house and the women inside. This is celebration on steroids. Exuberant singing and dancing and eating and noise. Jordan’s national dish, mansef, is usually the noon meal.

In cities such as Amman, things can be a little different. It is becoming more common to have a shortened version of the celebration for financial reasons. As I mentioned earlier, Western customs have an effect on urban dwellers in this country. Many brides now opt for a white dress you might see in the West—at least the more modest styles. A groom might choose a formal black suit. There is still a car processional, but it often ends at a wedding hall rather than the home of the groom’s parents. Guests may or may not sit segregated.

If a bride is not a virgin (unless she is a widow), there will be no wedding. After marriage, the husband oversees every aspect of her life. She cannot obtain a passport or travel outside the country without his written approval. It is legal for a Muslim husband to have up to four wives in Jordan (although the first wife must approve). It is not as common there as it is in other Arab nations, however.

Apparently Christian weddings are often more expensive and lavish than Muslim ones, mainly because they include alcohol.

The groom or his family pays all the cost of the wedding, which includes the clothing and jewelry for the bride, her mother, and her sisters. He is expected to buy or rent an apartment and furniture and appliances in advance. This is where the extended family comes in handy. If the groom is not able to pull this off, the wedding will not be held.

Here is a YouTube video outlining the differences between a typical U.S. wedding and a Jordanian one. It is told by an American woman who married a Christian Jordanian.

In an effort to keep costs low, some brides and grooms suggest having a scaled-down reception. But since this particular event reveals much about family status, the elders oppose diminishing it. It was revealed in an interview that some who cannot afford a lavish wedding used to go to Syria or northern Iraq to find a Christian bride for two reasons:

As Tina Turner said, “What’s love got to do with it?”

A full 41.4 percent of all marriages contracted in 1965-69 were between relatives, but by 2010, this percentage had declined to 26.1 percent.[11] It is most often that cousins on the paternal side marry. There are still many areas where the couple barely knows each other until the engagement party. That’s why, even though they are technically married at that point, they have to get to know each other until the consummation.

I remember my shock in the Amman airport at seeing an Arab man in full regalia surrounded by six or seven women attired in black burkas. Some could have been his daughters, of course. But he had quite an entourage. It was somewhat anachronistic because Jordanians in Western-style clothing strolled everywhere

Divorce is legal. When there is a divorce, custody of the children automatically goes to the father. He also retains possession of all household goods. For this reason, women choose to remain in a marriage even when there are other wives. Divorced women are viewed as outcasts.[12]

I discovered an interesting fact in researching marriages in Jordan. From the U.S. Embassy website:

“The U.S. Embassy in Amman cannot perform marriages in Jordan, even for U.S. citizens.

Family size has been decreasing since 1979 to about six members. Because of limited natural resources, particularly water, programs have been implemented to increase awareness of the benefits of family planning.[14]

I have written in previous blogs about the famous Jordanian hospitality. In every home, you will find a room like our formal living room, called “diwaan.” It is dedicated to receiving guests. No one goes into that room until it is needed for entertaining. Often as large as the main area of the house, it is adorned with as beautiful furnishings as the family can afford in contrast to the informal room where the family hangs out (like our den) is much less extravagantly furnished.

Often, you still see mattress-style seating and carpets. Newer houses have smaller rooms, sofas and chairs, and dining tables. There is that Western influence again. Gathering here for good times and bad, weddings and graduations are celebrated, and the passing of a loved one is mourned.[15]

It is normal for a guest to show up without warning—another thing that we would have a problem with in the West. It would be strange in Jordan to make arrangements ahead of a visit. Also, it is impossible to simply “drop by” to return something borrowed or any other quick reason and expect to leave quickly. It is inherent in the culture that you be saturated with food and drink before leaving some time later. No popping in allowed. You must be prepared to visit a while.

This subject matter was much more than I could easily fit into my normal 1,700-word blog, so I am going to split it in two. Next time, we will finish with these subjects: 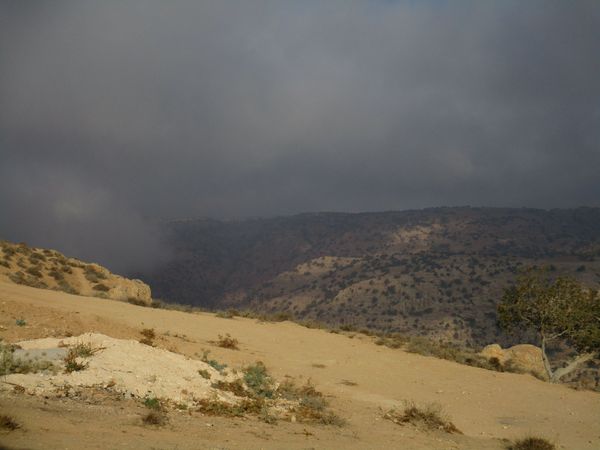 Members only
This blog contains the video we shot at Camp Nawatef, where we went for Feast of Tabernacles. It was the first day we were there, and Al videoed the sights around the camp and our “Tea/Coffee at Sunset” adventure in the bottom of the gorge. It is not professionally